I just started working on my first level set and was hoping to get some feedback. I only have the first level complete so far, but I'd like to know if people enjoy this kind of level. Here are the principles I've tried to follow:

As it is, I'm a bit concerned the level may be too long (should take 6 to 10 minutes, once you know the solution), or frustrating to have to restart from the beginning on each error (the hardest point is 2 minutes in). Or maybe it's boringly easy and I just find it difficult because I'm not that great a player. What do you think?

certainly try my dear friend
Be active;)
my 32 tricks
Top

It's funny, I'm so used to only using small red potions after making mistakes that a difficult part of this level for me was to think about drinking a potion near the start. I even had a reply draft where I explained that the level is impossible to finish unless you have also modified the base hit points in the EXE file.

So, I have two questions whose answers will make it easier to give feedback: 1. what's the function of the drop button? and 2. do you assume players will force the guard to move onto the raise button to keep the gates open permanently, or not?
Top

Thanks Norbert! Good point, I hadn't realized how much of a difficulty that would be, but you are right, it is. To answer your questions:
1. The drop button is only there to make the gate close effect at the start of the level like in the original. Should I put it in an inaccessible room in that case, so that it isn't a red herring?
2. The level can be completed without having the guard move onto the raise button permanently. The intended solution makes the guard only step onto the raise button briefly, so that you have to get through the gates quickly.

More info in spoilers:
Spoiler: show
Note that it is not intended to be possible to get through the whole remainder of the level the first time you get the guard to step on the raise button
Spoiler: show
The second time you meet the guard, you can save several minutes by killing him on the switch, but if you don't, the level can still be completed by going back a third time.
Thank you for taking the time to try it out, I hope you are enjoying!

Thanks for the answers.
My opinion is that the room with the guard and raise button (hereafter: room 1) is the interesting section of the level.
It's particularly interesting to try and get him to permanently stand on the raise button, which makes it possible to re-enter his room via the gate near the start.
Your intended solution seems quite repetitive. Correct me if I'm wrong, but it would require the player to make a loop to open the gate near the spikes section, at least one trip to drink the two potions to regain health, and then another loop to take the sword. This would take a while, with reaching gates in time as the only real challenge.
Let's assume the swordless prince would have started in the bottom row of room 1, with the only task being to move the guard permanently on the raise button, to open a faraway gate near the exit. Then the overall challenge factor might have been equal but more condensed. The guards are so weak, they don't really add anything. The prince doesn't need to reach a target in time when moving over the spikes, which means these don't really add anything. Neither do the rooms where the prince just has to fall and climbs back up.
Note that I do see what you're trying to do; the idea of revisiting rooms that have changed after performing certain actions is interesting, but you're using a lot of space for minor changes.
Then again, maybe it's just my personal taste in PoP1 levels. I prefer short but challenging levels (and without crazy tricks), such a this.
The sections where there's basically no challenge and the prince is just walking or climbing, if you add up all the seconds that takes, that's a lot of time waiting for content.
Players who do not use a level editor to inspect the level will get stuck in timed sections, where they simply don't reach gates in time without practice. This could become annoying if it happens several times in a row and requires full restarts. Players who do use a level editor will be able to plan out their entire trip ahead of time, and they may not find a challenge here.
Don't get me wrong, the level is not bad. I just think that I can tell by what you're trying to do that you're smart enough to make something (even) better.

Hi Norbert, thank you for the full and constructive feedback!

I see what you are saying. Yes, the solution I intended is indeed repetitive. I was thinking that that in itself would add an element of difficulty: players might not think about going back where they've been already (especially if it costs 2 life points) as well as it being interesting to revisit rooms under slightly different conditions. The guard near the exit and the spikes are only there to slow the player just enough so that it is not possible to make it all the way to the exit on the first loop. Also, even though the guards are weak, taking a single hit from either of them should prevent you from finishing the level (unless you manage to get the guard permanently on the raise button) which I though would make it not too difficult, but still require concentration to not mess up.

I do agree with you that it is too long though, too much time walking through rooms with not much happening. That is mostly a consequence of wanting to have the two long drops one on top of the other, in order to force the player to have to drink a potion at the beginning, and then be very careful not to lose a point at any other time, because there is only enough potions to go around the loop 3 times.

Now, I am curious though, as you seem to indicate it is possible to move the guard onto the raise button permanently (without killing him there with the sword) which I was not able to do myself, have you been able to?

I think based on your feedback I'll probably try to split the ideas I have in this level into multiple levels, so that each is more condensed and less frustrating to have to restart from the beginning.
Top

I've been unsuccessful at replicating it just now, sorry.
Maybe I was just lucky that one time.
Or maybe the prince died on the raise button and I revived him manually, leaving the button stuck.
I don't know. Maybe yaqxsw or someone else can find a way to consistently do it.
Top

I looked this level a bit and here is my answer.
Step 1: Blue guard on room 1 need push down. Trick is like this video - 3:42. After that prince run on room 8, break tile on raise 9.
Step 2:Red guard on room 8 need better make way clean, because you havent many time reach to room 9. So need play a trick like This - guard move on room 1, later back room 8. After raise 16 prince can run trought guard back without using hard trick "trought guard". 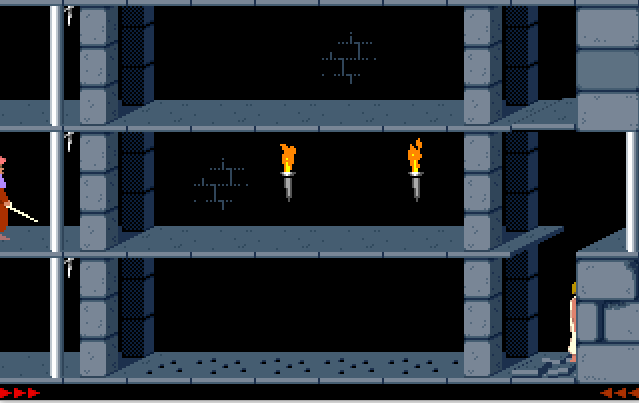 Map is smal, but take many time

Hi yaqxsw! Thank you very much for your input! You sure know how to find the most ingenious ways around a situation. Makes me rethink some parts, though it sounds like you enjoyed it!

Norbert, I have now actually managed to replicate getting the guard onto the raise button permanently, and have taken your advice into consideration while reworking the level to make it more compact. I'm working on a new version, and on the following levels. I'll post again once I have something ready to share!

Thank you all so much for your interest and input!
Top

I really like the design philosophy of the level. It took me a number of tries before I understood it, but the solution is quite rewarding

Hm, perhaps it would be an idea to move the very last gate one tile to the left or so? Then, it may be more obvious how you could pass it the second time around, because you would see it close shut the first time along with the other gates.

Hi Falcury, Glad you like it! Yeah, that's a good idea. It must be frustrating to get all the way there and then realize the gate is now closed. I'll try to work that into the next version.