Howdy, been a long time!


Heart of Zyra is my fresh new set of 13 levels for Prince of Persia, including the princess rescue and something else. This tells yet another remake of the princeverse story we all know: long long after the death of Jaffar, one of his zillion cousins -let's call him Gerald- woke up from the wrong side of the bed and decided to rule the persian kingdom just like that, and so he stole the throne with no troubles. One day, he felt pretty and ordered his pet guards to locate a princess and kidnap her... one of them, whichever got in the way first. Zyra, who couldn't resist the side effects of the bubbly potion, surrendered to some orange coated guards and was taken to Gerald's palace, where they left her locked in a chamber. Our prince found out about this and went for the rescue. Now this is when you finnish the story.


I consider this set to be moderately easy and straightforward: lots of free running jumps enabled, nearly no backtracking, might require a tiny bit more than generally basic movement and timing, like one or two special tricks in places. Most levels can be finnished in 2-3 minutes with knolwedge, with or without secret potions. Some may be even much shorter, owing to more than one possible route or "non-linearity" to reach the exit door, which is a goal achieved given that some of my older levels would drag for no reason. If you're familiar with any of my mods (and enjoy them), then you should feel at home.


The story isn't actually shown in-game, because I can't be arsed to edit any graphics (sorry!). For now, have a look at these screenshots that don't really tell much: 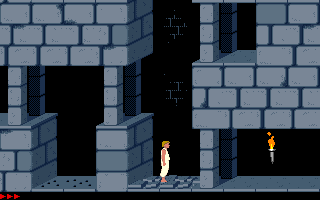 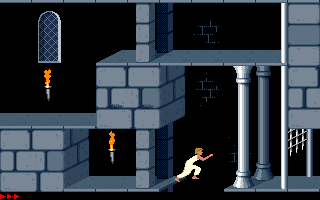 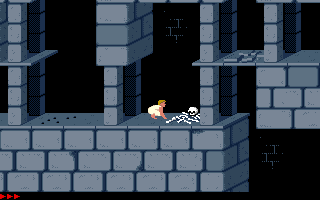 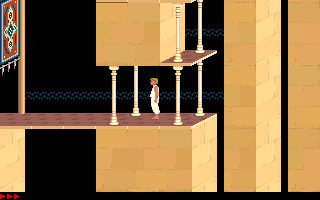 Extra trivia: (don't read if you don't want to be spoiled)

Spoiler: show
- This marks my 16th levelset for PC PoP, holy f*** that's numerous!
- I made levels 1 and 2 in apoplexy several years ago, and I decided to leave them as is. Level 3 remained as an unfinnished draft for years and only recently continued from there, in Roomshaker for old times. Levels 4 to final were made during this week. Talk about a sudden burst of inspiration!
- There is a total of 6 accessible -but secret- life potions throughout, and the last 1up is by merging with the shadow. Nothing extraordinary...
- The shadow in level 6 will cause the politician (fat) guard to dissappear while in the same room. This is a happy accident that became intentional as part of the mini-challenge, so don't freak out (;
- You will need to perform a couple special tricks every now and then. These mainly involve loose tiles. No dead guards on buttons required, but might still come in handy.
- The copy-protection level has been modified too. This means that all levels (1-15) sans the demo are new, but how you get to that one level is something I'll let you figure out -- I cannot atest if it's even possible by "legal" means or not...
- Control+V displays the title of the set.

Spoiler: show
- Level 12b is set to display "LEVEL 13" in the bottom, but it only does when restarting it (or via skip level), not when entering through normal means. If there is a workaround this I'll appreciate any tips!
- I thought it would be cool if when you exit the copy-protection level, it goes back to the rescue level, but I don't know if that's a possibility. Currently, exitting level 15 causes the game to break.


Hope you enjoy your time! If you encounter any glaring issues, please report them here.


P.S. I would like to hold off on uploading to popot.org until there is a decisive final release, as I'd also like to write a tl;dr brief description for it. Unfortunately I'm not gonna have access to my computer until later next week so, in the meantime I'll be only checking comments if there are any.

Hey yourantumayel69. I am registered there, though as I said above I prefer to wait for when I have a final update that'd go straight to popot. If you still want to try it out, it's fully playable.

Apologies for the double post, but this set is finally on popot! I think this is my first time using the submit feature there, and it was super easy to handle so kudos for implementing it.

robert wrote: ↑November 19th, 2022, 8:25 pmApologies for the double post, but this set is finally on popot! I think this is my first time using the submit feature there, and it was super easy to handle so kudos for implementing it.

I'm glad you found the submission form easy to use.
Also, it saves me a lot of time, not having to add/modify all mods by myself.