I think it only works when Prince has 1 HP. Check the hit points in the video. I think it's basically the case where Prince HP becomes 0 (because of lose tile has hit him), and the game doesn't check if it should stop the Prince from going through the wall when he jumps. The jump keys should be pressed perfect enough, otherwise you would die. I think it's the only frame where you can perform this trick. One frame before or one frame later and the trick won't work. I could do it in SDLPoP (needed 20+ Quickloads, but it should be possible with DOSBox too):


Could be useful if merged with trick 88.

Norbert, I think you should add this to PoPOT (something after a long time

It is not a trick, since according to previous tests on my part, prince can pass through walls when he is dead

It could be very useful if only a way to fall a few pixels further to the right was found. But so far it looks like it's impossible

by eien86
Useless (for now) for the original Pop, but perhaps interesting for modders. There's a way to bring a guard to a lower level even when it seems impossible because there are spikes below:

by David
If you do Trick 1 with a mirror, the prince will briefly appear on the other side of the mirror.

The real prince is on the left side of the mirror, barely visible.
The other prince on the right is his mirror image. 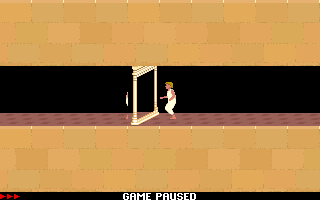 by VelCheran
Nice one! The game is really puzzled by the situation, it seems. It detects the prince as being briefly on the right side of the mirror, thus decides to draw his reflection, but since he really is on the left I guess there's some kind of geometric symmetry involved and it puts it on the right. I don't know if my explanation makes sense but it does in my mind at least

by dmitry_s
The game checks if prince is standing on the mirror tile and draws a mirrored reflection of the character by using the opposite direction and distance to the tile calculations.

The assumption is you can only stand on the tile at the right side of the mirror. But just like you can step on switches through gates using certain frames, you can stand on the tile on the left side which causes the shadow image to appear. It can most likely be fixed by adding a `Char.direction` check. The SDLPoP fix for gates probably fixes it as well by properly calculating prince's column.

I have not checked why it uses a standard blitter so shadow looks like prince.

Yes, "Settings -> Gameplay -> Fix pressing through closed gates" fixes it.
But even with that fix on, sometimes the mirror image appears briefly when I run into the mirror from the left.

It's a mirror image what appears in the mirror, not the shadow.
The shadow appears only when you jump through the mirror.

Yeah, it's a bit confusing that the mirror shows the prince's mirror image, but when he jumps through it then his shadow is released.

by dmitry_s
You are right as always. The reversed image in the object table does not get does OR/XOR'd. That only happens when to the shadow in the Guard slot.

by David
I found out how to pick up the sword on level 12, without using the Overflow Bug.

I attached a replay file showing how to do it.

by atrueprincefanfrom18
Not sure why I can't play it. Any chance someone could upload a video?

Here is a video of it, recorded from DOSBox.

by VelCheran
Interesting, this works with 1.0 but not with 1.4 so I guess it was known and corrected.

by VelCheran
Indeed, my bad, I probably did something wrong.
All times are UTC+02:00
Page 2 of 2